Political ads have always been strategic. Campaign managers and strategists devote countless hours to determining what messages will generate the most votes. Think about the cycle of creating a TV spot based on a platform point, delivering it to a targeted audience, gauging the interest and response, and then heading back to the drawing board to do it all over again. Mobile advertising puts that process on steroids. Technologies like geofencing and geotargeting, along with the data capture capabilities of digital, make mobile a powerful tool in political campaigning.

Unique Ads Based On The Congressional District

When it comes to the targeting capabilities of digital, Thumbvista’s mobile solutions are extremely valuable. With geotargeting, we now have the ability to target ads using pre-mapped congressional district targeting for all digital display advertising. This allows candidates to serve hyper-localized ads to a specific, targeted area. Since the digital and mobile ad space is so competitive, the scale and availability for political ads is limited. With the number of tightly contested positions in a pivotal election cycle, being able to pick out specific areas to run digital ads will be crucial for making sure you are reaching the right voters.

The first signs of this new age in political advertising came in 2016 when spending on broadcast TV ads dropped by 20% and digital increased by 789%. Then in the 2018 midterms, programmatic buying made up 60% of the digital ad spend, demonstrating the value of data-driven digital targeting. This year, political ad spending is expected to reach well over $6 billion for the first time, with more than 20% going to digital channels. 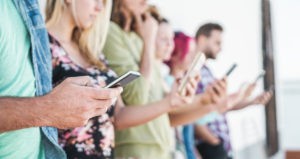 When every vote counts, the specificity of geotargeting is huge. Campaigns are using mobile in various ways. They can now send texts to voters in their district to make sure they get out to vote and they can also remarket with display to voters who have attended campaign events or serve CTAs for volunteers and donations. Both techniques can be used for cause marketing as well. For example, cause campaigns can target a school district or watershed area to inform voters of pertinent propositions that will be on their ballots.

It also gives political marketers the ability to test and adapt more quickly and efficiently. They can use A/B testing strategies to target, gauge response, and remarket faster than ever before. This ensures that their campaign becomes more effective over time as election day approaches.

Whether it’s mobile advertising, TV spots, or front-yard signs, political advertising in an election year is inescapable. Each candidate in every race, from both parties, will be pouring money into advertising until Election Day. The same goes for causes, propositions, bills, and amendments. That includes local, state, and national political campaigns.

While politics may be late to the mobile marketing party compared to businesses, they will be taking full advantage this election cycle. With a growing track record of success, it is most likely that political mobile advertising will continue for a long time to come.